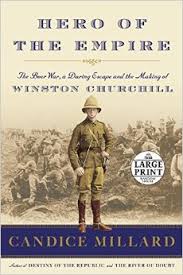 At a callow 24-year old, Winston Churchill, who had just lost his first election campaign for Parliament, believed that he must do something spectacular to win renown. Hero of the Empire by Candice Millard tells how he did it.  His gateway to fame was the brutal war the British were fighting with Boers (Dutch) in South Africa . Just two weeks after his arrival, Churchill was captured-ignominy! Remarkably, he pulled off a daring escape -fame!  Author Millard makes her tale “as involving as a popcorn thriller” (NYT).