War and rumors of war 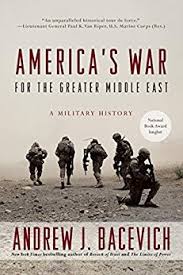 Here are two accounts of post-Eisenhower conflicts in which our country has been embroiled. In A Great Place to Have a War, Joshua Kurlantzick details the CIA’s Operation Momentum, which clandestinely supported ethnic Hmong fighters against the communists in Laos.  The secret war, the author argues, changed the CIA from a gatherer of intelligence into “a paramilitary organization (Publishers Weekly).” America’s War for the Greater Middle East by Andrew Bacevich appraises the cost of our military ventures in the region from Lebanon in the 1980s through stops in Somalia, Afghanistan Iraq and Libya. “Immensely readable” (Kirkus Reviews), “thought-provoking and fearless” (NYT)   The New Odyssey by Patrick Kingsley details the blowback from one of these conflicts: the current refugee crisis in an “eye-opening” account.