Reading by the numbers… 2 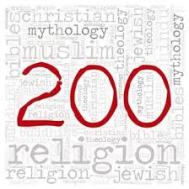 Our entry for the 290s (religion) isn’t here yet, but it’s a classic.  Be Here Now by Ram Das (Richard Alpert) recounts his spiritual journey from head to heart.   Ram Das began his journey life as Richard Alpert, an ostensibly successful  Harvard professor gripped by a sense of unease. That eventually led him to India, where he encountered yoga, eastern philosophy and a guru who transformed his life.  Goodreads calls this a “modern restatement of the importance of the spiritual side of human nature”.