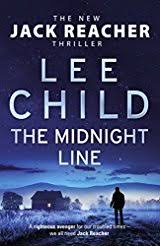 “The Midnight Line” by Lee Child. Jack Reacher spots a West Point ring is a pawn shop window, the first step of a journey from the wars in Afghanistan to the opioid crisis in America. “In the Midst of Winter” by Isabel Allende. a minor traffic accident—which becomes the catalyst for an unexpected and moving love story between two people who thought they were deep into the winter of their lives. Hardcare Twenty-four by JanetEvEvanovich. Presents the further adventures of Stephanie Plum, bounty huntress. In the Shadow of Alabama by Judy Reene Singer. When a stranger at a funeral delivers an odd gift and an apology, a daughter learns the epic story of her father s World War II experience. “Before we were Yours” by Lisa Wingate.  A breakout novel based on a true story about children who were sold to orphan homes.