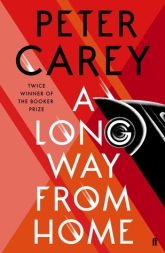 Besides our Oscar DVDs, we new books by four award-winning fiction writers.  Two time Man Booker winner Peter Carey’s latest, “A Long Way from Home”, is a “brilliantly vivid” novel about a couple that enters a across-Australia car race. White Houses, the new story by Amy Bloom (National Book and Critics Circle award nominee), is about “one of the most intriguing relationships in history”*, that Eleanor Roosevelt and her “first friend”, Lorena Hickok.  The late Denis Johnson, deemed by New Republic as “the best American writer of the past twenty-five years,” and author of the National Book Award-winning “Tree of Smoke”, is remembered by the story collection “Largesse of the Sea Maiden”.  Finally, Edgar winner John Hart has written “The Hush”.  A sequel to “The Last Child”, it takes the latter’s main character into his coming of age.  The story should confirm Hart’s status as “a writer of unique power”.