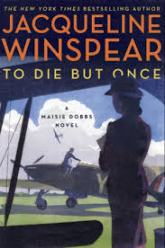 In The Disappeared, C. J. Box’s Joe Pickett searches for a missing British CEO.    Jacqueline Winspear, meanwhile, has a new case for Maisie Dobbs in To Die but Once. It is the spring of 1940, and Maisie  is asked to investigate the disappearance of an  apprentice craftsman working on a “hush-hush” government contract.  Way out west, Cave of Bones is Anne Hillerman latest Leaphorn and Chee mystery.   Officer Bernadette Manuelito’s outdoor program for at-risk teens goes array when one of them stumbles upon a human skeleton. And in the sunny Caribbean,  Marine biologist Doc Ford helps on old friend out of a jam involving sunken treasure in Randy Wayne White’s Caribbean Rim.