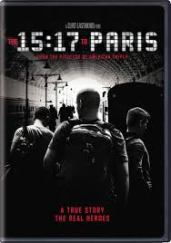 Heroism on a more mundane level is on hand in Clint Eastwood’s “The 15:17 to Paris”. Two off-duty servicemen and a college student board a train to Paris which it is high-jacked by a terrorist.    Eastwood ‘shoots with documentary-style immediacy’ as he tells this tale of ordinary courage.   In “The Commuter”, Liam Nesson plays an insurance salesman whose train ride home becomes a race against the clock.