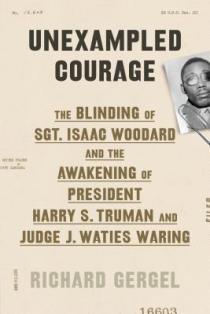 Richard Gergel’s “Unexampled Courage” tells how the mistreatment of an army veteran let President Harry Truman and southern judge J. Waties Waring on the path to history-changing decisions.  On February 12, 1946, Sergeant Isaac Woodard, a decorated African American veteran, was removed from a Greyhound bus in South Carolina, arrested, and beaten so badly while in custody that he was blinded for life.  An all-white jury acquitted the arresting officer of charges. Outraged, President  Truman launched a presidential commission on civil rights and ordered the desegregation in the U.S. armed forces.  Meanwhile, Judge Waring, who presided over the Woodard trial, was appalled by the acquittal and began to take civil rights cases, one which laid the groundwork for Brown v. Board of Education.  Both worked closely with lawyers William White and Thurgood Marshall of the NAACP.  A brisk pace, vivid personalities and a galvanizing story make this an excellent read and our top selection for Black History Month.  A related read is “Invisible”, Stephen Carter’s life of the black woman lawyer who built the case that took down mob boss Lucky Luciano.